When I was little (about 2002-2007), I played a lot of games, both Flash and Windows ones. Most of them are simple arcade/puzzle games my young brain could handle. I’ve recently had some fun trying to track them down with some Google-fu; it’s also interesting to see what’s the history behind those games.

This post was inspired by Lost Media Wiki, an online community which tries to find missing films, songs, games, and other sorts of media. I’ll also add more games as I found them.

Since I didn’t play popular games like Doom or SimCity, it can be hard to search for these games, but so far the Internet Archive is the best place to find them. Most of these games also runs very well under Wine.

I used to play this game on my Dad’s work computer (a Windows 98 machine, if I’m not mistaken). You must shoot at targets like balloons and soap bubbles until you finally meet the boss of the game, the Black Archer. It’s harder than it looks like.

You can download and play it (thanks to the embedded DOSbox) from the Internet Archive.

P.S: Play it with a mouse instead of a touchpad. 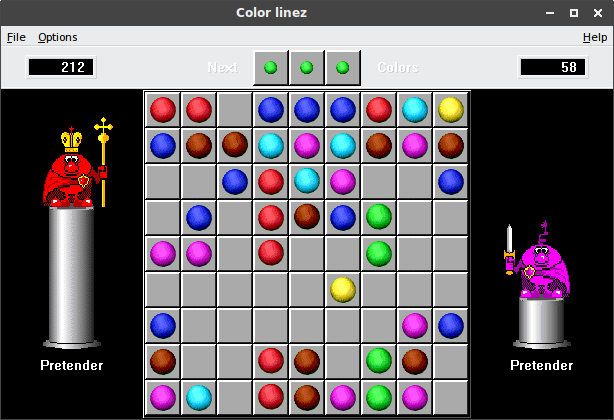 This game is the familiar five-in-a-row puzzle game, although this seems to be the first version of such game available for Windows. You must make a line of five or more balls with the same color to make them disappear and make room for new balls. Still not sure what ‘Pretender’ or ‘Handicap’ means, though.

It’s available on the Internet Archive. 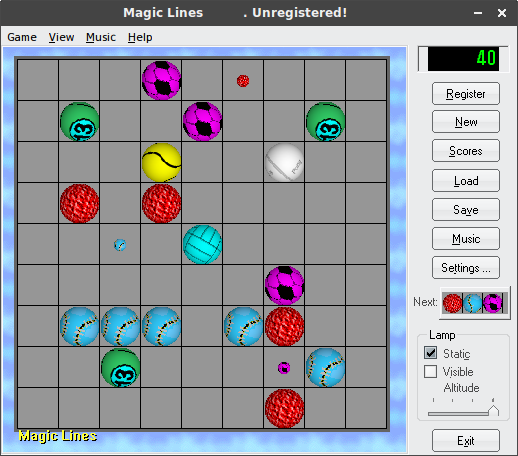 Another version of Color Linez, but with sport balls (baseballs, tennis balls, golf balls, etc) instead of plain balls. I mostly remember this game for its sound effects – if you succeeded in making a line, it would disappear with an explosion-like sound. It also has a built-in MIDI player and some MIDI files, for some reason.

P.S: If the 3D effect and lighting make you dizzy, check the ‘static’ option on the sidebar.

This game is essentially Shishen-Sho, but with Pokemons instead of Mahjong tiles, a timer, and 10 lives. It’s quite popular in my country (and Vietnam as well, looking at Google search results). Here, it’s the ultimate nostalgia game; almost everyone I know have played it at some point, and it’s also known as ‘Onet’. I’m still unsure where that name came from.

The game itself is very easy to find, although most of them are hosted on shady file-sharing sites. I’ve archived the executable file I got a long time ago (along with a .dll file to make it runnable under newer Windows versions) and uploaded it to Dropbox.

(Screenshot taken from Moorhuhn.de, since I can’t take a good screenshot under Wine for some reason)

The objective of this game is simple: shoot as many birds as possible in 90 seconds; the farther the bird, the more score you’ll get. When your ammo runs, out, reload by right-click.

It turns out that this is the only non-abandoned game in this list. This is the first game in a series that continues to this day, as you can see on its official website. This version’s official page is here, and it can be downloaded on the Internet Archive.

I remember this game being my Mom’s favorite game. The goal of this game is to remove all blocks from the screen by clicking on groups of blocks with the same letter/color. Other than that, there’s nothing exceptional about this game.

It’s also on the Internet Archive.

I would forget about this game if I didn’t stumble upon it on My Abandonware, a site that collects old games for many platforms. In this game, you must help Zeek, a smurf-like alien creature (a ‘Geek’) to collect mushrooms. You can push blocks, unlock doors, and blow stuff up. Just beware of carnivorous purple flowers and poisonous mushrooms.

This game is still fun and challenging after all these years, but it turns out that I still hate Zeek’s slow-ass walking speed.

You can download the first and second edition here, or play it on your browser on the Internet Archive. There’s also a faithful HTML 5 clone with second edition’s puzzle packs, and an Android port which seems to be based on the second edition. Zeek’s walking speed here is much faster, and there are some extra features, too.

Compared to Windows games, Flash games are much harder to find. I’ve never paid attention to the innumerable Flash game websites on the internet (If I wanted to play Flash games, I would go to Kongregate.com), but I won’t find most of these games if they didn’t re-host it. 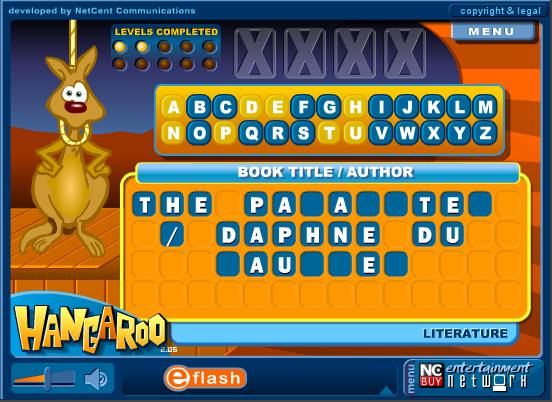 You’re supposed to save a kangaroo from death by solving 10 consecutive hangman-style quizzes. It has a lot of categories, from the usual capital cities and common phrases to respiratory problems and tallest mountains. The kangaroo is pretty snarky and says things like “Do you have something against kangaroos?”, or “Why do I always get stuck with the idiots?” when you selected a wrong letter.
This game is very easy to find; there’s an unofficial website, it’s available on some flash games websites, and the executable version can be downloaded on some download sites.

I have no idea this game is that old. It’s actually based on a TV ad of ecampus.com, a still-running textbook rental/store, where a broke college student, having spent all his money for textbooks, resorted to fry his roommate’s pet goldfish for dinner. In this game, you’re playing as the goldfish’s owner (who’s a political science major, for some reason), trying to save the fishes by catching them as they’re jumping on the frying pan.
This game is fun, but I always feel bad for playing it. The fishes themselves and the pleading sounds they make as they’re being thrown to the pan are just too cute.

This game can be found on flash game websites, like this one here.

Yeah, I played this game when I was 6. I was too young to recognize who she’s supposed to be.
In this game, you’re a stripper/superhero called Stripperella (created by Stan Lee, and based on an animated TV series) who had to save your friend Giselle from a strip club (?) controlled by the evil Pushy Galore. You’ll have to climb and jump from poles, catch randomly-appearing dollar bills for higher scores, and avoid falling boots, bottles, and pole grease that can knock you down the screen.

The controls are weird and the game only has three levels; the first level seems impossible to beat, but remember that Stripperella can jump (annoyingly, this is the only level that relies on this ability :/).

This game is not saved on any flash game websites, but I found the link to Stripperella’s official site where the game used to be hosted, which is archived here. The game’s loader itself is here, if you want to play the game in full screen. 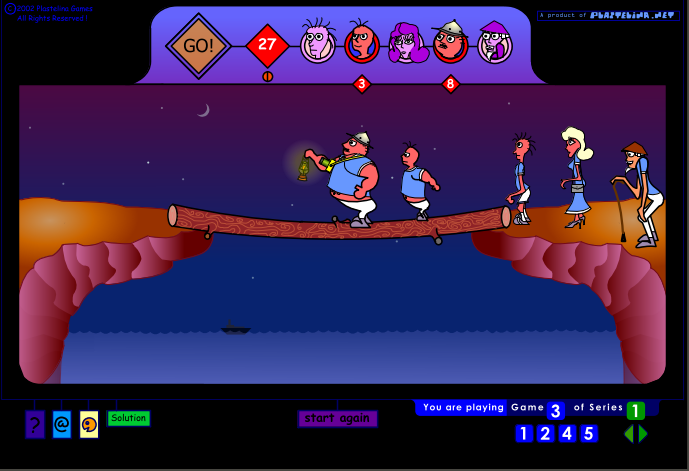 This game is a variation of the fox, duck, and grain problem. You’ll have to move a family from a side of a cliff to another using a tree trunk as a bridge and a lantern to light up the way. The family can only get to the other side in pairs, the lantern only lights up for 30 seconds, and each family members have different walking speeds. If the lantern goes off while the family member is still on the bridge, they’ll slip and drown.

This game frustrated me when I was a kid, since I could never solve it. It’s made worse by the ship on the background which sounds its horn every few minutes, and always succeeds in freak me the hell out.

This game can be found on some educational websites. Plastelina itself was a company that made free and paid puzzle/strategy flash games. Its website, along with some games, can be found on the Internet Archive; only the free ones are available to play.

In this game, you’re controlling a girl riding a red bumper boat in a pool, and you must use your mouse to bump your boat to your enemy (a backwards baseball-cap wearing boy) until it broke down. You can catch bubbles to fix your boat or a rubber ducky to increase your boat-bumping power.

Most Flash games I found have some sort of creator information on it, like logos or a credits page, but this game has none of them. The most information I got is from this long-standing flash games website, which said that the game was made by ‘makers of Sim Coaster’ which is Electronic Arts, and the author’s site refers to the German website for The Sims 2, which is also made by the same company.

For some time I assumes that this game was made by EA itself and was possibly one of several mini games playable on Electronic Art’s website, until I lose a game and the logo for the developer, Bossmonster, appeared. Looking at the current Bossmonster website, there’s nothing suggesting it has made this game (or still make flash games at all), but according to the resume of someone who used to work for them, the company did make the game.

The game itself can be found here.

You must knock penguins from the boat-shaped iceberg into the water, using a gun that shoots ice cubes. Every so often, a puffin would appear, and you would get extra score if you knock it down.

This game was also made by Bossmonster, as you might notice from the same music, power bar and buttons as the previous game. In fact, I re-discovered this game at the same website. It can be played here.

The wording for the intro made me think that there’s a previous version of this game I haven’t played. I discovered that one too, which is basically the same game with a beach theme.

The first version is here and the second is here.

I still have no luck searching for these games, and it’s made worse by the fact that I can’t remember the names or other details of them: 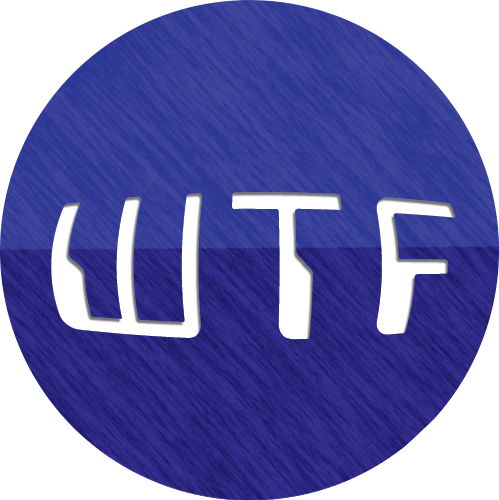